Sing We Joyous, the annual holiday spectacular, is back in a special 2020 online edition! Join all the regulars—The Oriana Singers, City Voices, Pro Musica Youth Chorus, and the Sing We Joyous Orchestra—in your own home via YouTube. You’ll hear some of our traditional features, like “Angels We Have Heard on High” and “Variations on Deck the Hall,” but also lots of new stuff, including a gorgeous rendition of “The Gift of the Magi” and a hilarious silent film version of “The Night Before Christmas.” And of course, it wouldn’t be Sing We Joyous without a special version of The Twelve Days of Christmas. Plus sing-along carols and fruitcake…how can we fit all that into one show??

Join us for the premiere on Saturday, December 12, 7:30 pm. Normally we rely on your ticket income to make Sing We Joyous happen, but this year we hope that you’ll make a donation to help us meet our costs and to ensure the return of the live show next year.

We will post a link for the concert soon. Watch this space! 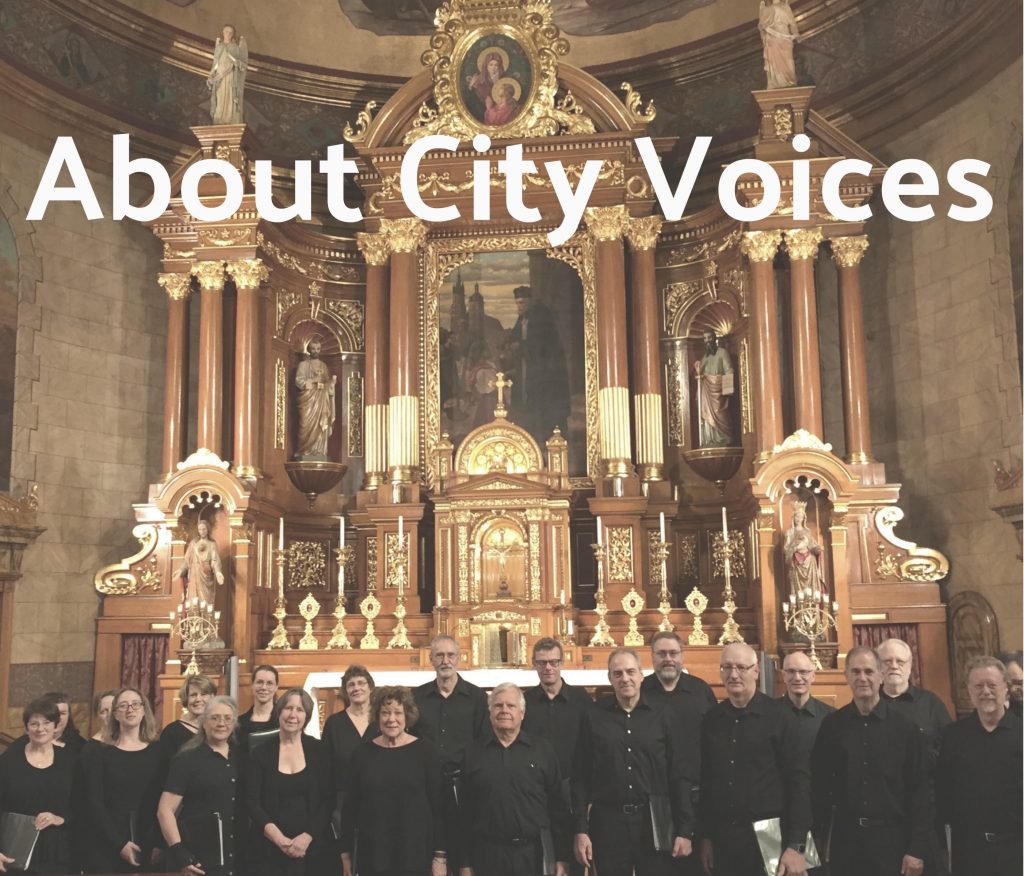 City Voices is the most versatile community chorus in the Chicago area. Members are experienced choral musicians who understand the joy of singing a diverse, challenging repertoire with friends, and bringing the beauty of that work to our community.

City Voices debuted in 2009 with Music At First’s annual Sing We Joyous holiday concert and as part of the chorus of the Symphony of Oak Park and River Forest, singing Brahms’s Requiem. Later that year the group performed selections from Monteverdi’s Vespers with The Oriana Singers for the rededication of the windows in Chicago’s historic St. James (Quigley) Chapel.

The choir’s diverse repertoire includes Handel’s Messiah, Mahler’s Eighth Symphony, Noye’s Fludde by Britten, and the Rutter Requiem. City Voices performed in the 2013 Community Concert with the Chicago Symphony Orchestra, in Arvo Pärt’s Berliner Messe with the Chicago Arts Orchestra, on tour in London, England with Pro Musica Youth Chorus, and is a regular featured part of the annual Sing We Joyous holiday concert. Last season City Voices joined with The Oriana Singers for the world premiere of Peter Meechan’s Love Songs, for brass ensemble, organ, and chamber choir.

Director William Chin is founder/artistic director of The Oriana Singers, an international-prize-winning vocal ensemble. He is a founding and performing member of The Rookery, Chicago’s premiere men’s a cappella ensemble. He also directs the Pro Musica Youth Chorus.